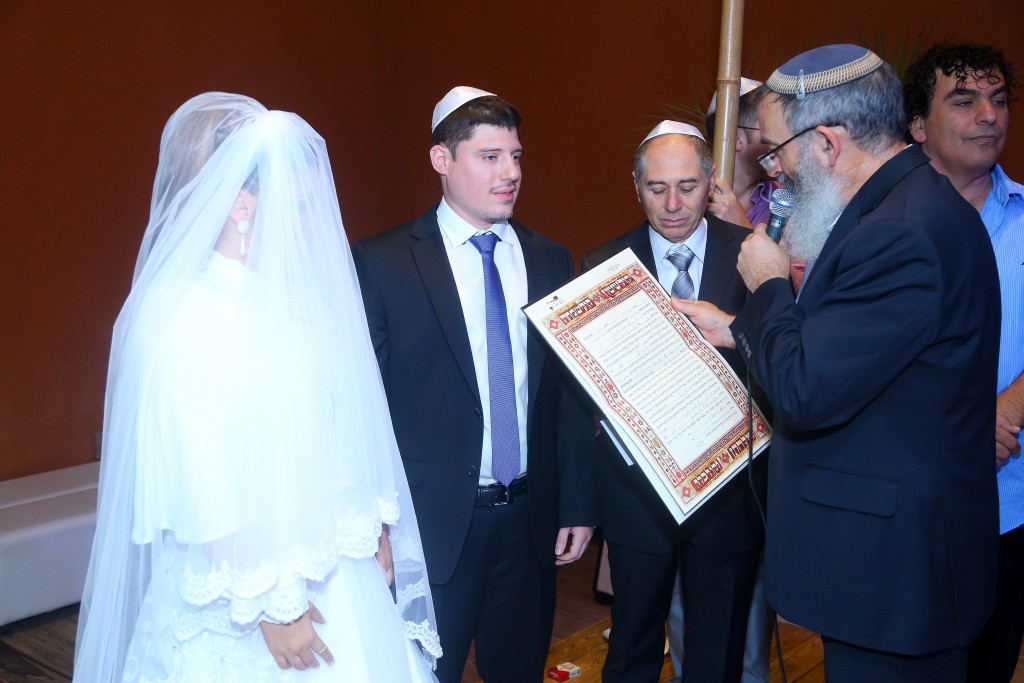 Rabbi Stav, how many couples have you married to date, thank G-d?

More than 3000 couples throughout Israel in all sectors.

Can you guess which of these couples will face problems along the way, according to their conduct?

I am not a prophet, but one can say that, sometimes, one can distinguish criticism of one of the spouses towards the other in discussions between them, which are omens for the future of their relationship.

Can you recollect any frictions already in the early stages?

Yes. For example, there was a couple who had a serious argument as to who would accompany them to the Chupah The bride’s parents or the groom’s parents. While this occurs infrequently, it does happen.

Once I had a case concerning a couple that did not want the parents to accompany them and, under the Chupah, one of the mothers said that if they would not accompany the couple, they would leave the wedding. In another case, the father insisted that $3 million should be recorded in the Ketubah. I did not agree. I told him to look for another rabbi. Ultimately they compromised on the sum and I married the couple.

Can you understand couples who have reservations about signing the Tzohar prenuptial agreement? What problem is so severe that it is necessary, precisely at that beautiful time for the couple, to get them to sign the agreement in the event that, perhaps in the future, the marriage will flounder? If, Heaven forbid, this occurs, surely they can sign then.

I can understand, but cannot agree. Marriage is a highly challenging, important and significant “institution” and it is necessary to approach it after accurate and precise planning in order the to do everything to avoid mishaps along the way. Signing the prenuptial agreement is not taking any especially large step. It actually testifies as to the purity of the intentions of both parties.

How can you explain the fact that some couples sign the Ketubah, which is a binding legal document, in 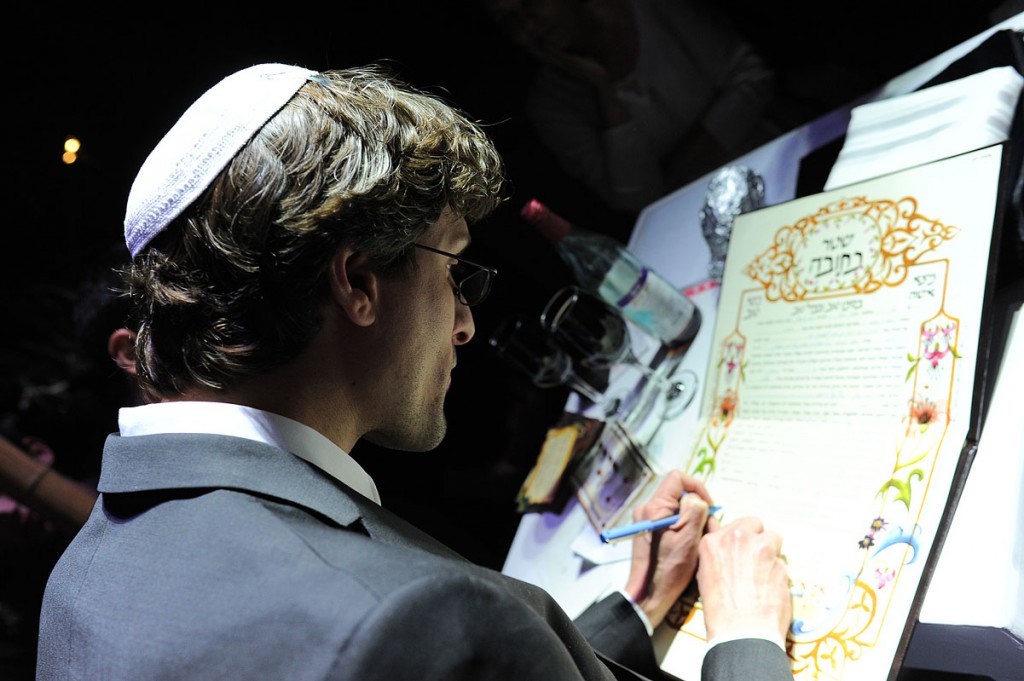 a language that they do not understand, Aramaic, without hesitation, yet still have reservations about signing the prenuptial agreement?

I think that signing the Ketubah is a perfect example of the fact that the couples have entered into a commitment without understanding its significance. They apparently do not think that their signing will bind them sometime in the future and, therefore, they tend to be the flippant. A person signs the Ketubah and tells me, by-the-way: Write 1 million shekels, 2 million shekels. He does this because he does not think and understand that reference is to a binding documents or he believes that reference is to a religious activity and not to a legal matter. Because it is written in clear language, anyone signing the prenuptial agreement, understands what they are signing and, therefore, they have hesitations about signing. However, the Ketubah is a no less binding deed.

So how does this agreement work? Does it fine a person who doesn’t want to separate?

The essence of the agreement is that the couple commit themselves to each other in full partnership in the household expenses and, in any case, to the division of incomes. As long as the spouses live together in harmony and favor, none of them tries to exercise the agreement. However, as soon as one of the spouses wants to separate and, after they have undergone an unsuccessful reconciliation process, only then does the basic undertaking that they made to each other on entering the Chupah come into effect.
The working assumption of the agreement is that a normal person would not want to pay alimony of half of his salary or, alternatively, six thousand shekels, to a woman who lives separately from him. In such a situation, it would be reasonable to prefer to solve the problem in court.

Why not fine the person who becomes the anchor? Are all these difficulties necessary?

Clearly, the anchor party must pay the alimony. However, we do not want to fine him, because, pursuant to Jewish Law, we cannot fine him.

Are people entering a second marriage more inclined to sign? If yes, why?

For the most part, there are 2 main reasons: The property accumulated during the first marriage, for which those married for the second time wish to protect their rights or, because of the unsympathetic divorce experience, which taught them that it is necessary to prepare themselves properly for the second marriage

For the most part, those who perceive the matters clearly are the parents, because they have
experience.  A marriage counselor, who was asked about this matter replied that it is not worthwhile involving them.  What do you think? To involve those with experience regarding this matter or, is it unnecessary to bring the bride and her mother-in-law into conflict already at this stage? 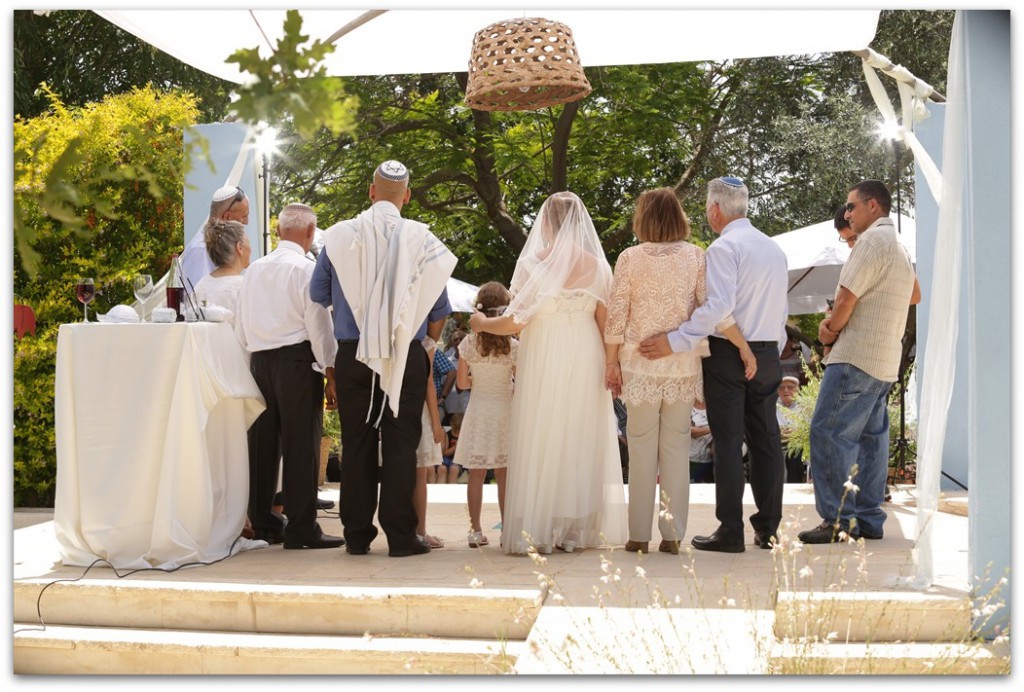 Parents have an advisory and directing, but not compelling function. It would be better for the parents to open the couple’s eyes and inform them of the importance of the matter without compelling them to do anything. I must specify that in a number of cases, the parents do not agree to participate in the marriage without this agreement.

In conclusion, have sufficient couples signed the Tzohar prenuptial agreement in order to see how this agreement effects separation?

No We have not yet gathered any experience on the matter. Apparently, signing the agreement blessing for  a good and happy life.